Cicadas are the insects people hear more often than see; they're the loud buzzing sound we may associate with summer. When we see them, it's often as a flash -- they're super fast flyers. But they're not so fast when they emerge; they crawl out of the ground in their nymphal shells, climb up a tree or some other nearby vertical [like one's legs, if one stands still for a while], and struggle out of their skins. After that it's still a long while before they can fly. And all of this time is when you can scoop them up by the pound.

Some species live only one year; the periodic cicadas are better known due to their staggering emergences. A predator-response strategy has led the species to stay beneath ground for either 13 or 17 years (depending on the particular species) and then come up more or less at the same time. This allows a range of creatures to eat as many as they want and still allow a good percentage of the insects a chance to reproduce. 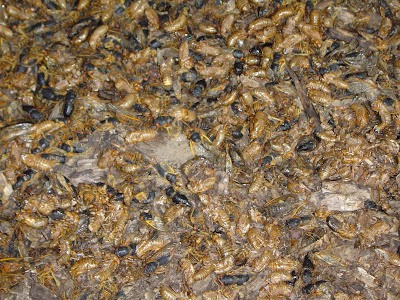 And here's a single one: 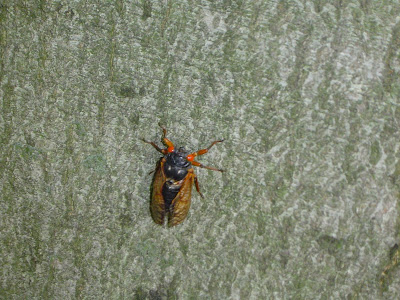 In 2004 the "famous" Brood X emerged in many states on the Eastern Seaboard; I drove down to Princeton, NJ; slept in my car on campus during Memorial Day weekend; and harvested eight or nine pounds of cicadas from a few massive beech trees on the Princeton campus. I've been serving them -- sauteed or dry-toasted -- to the public ever since. A few images of that event are on my website.

This year it was Brood XIII's turn. They were locally numerous in the Chicago area, and since I couldn't get out there I contacted a professor of Entomology, who knew of a few graduate students -- my official "THANKS" go out to James (Jamie) Zahnisser and his crew of friends -- who were willing to collect some for me. The cicadas arrived a couple of weeks ago. 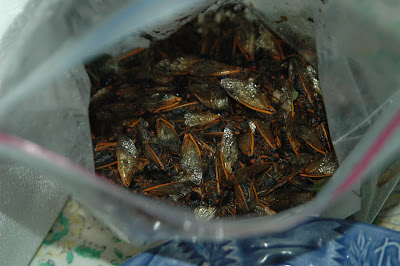 After a little rinsing, I packed them into the freezer (as I've said before, I've got an understanding wife). 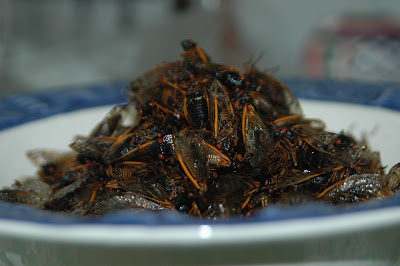 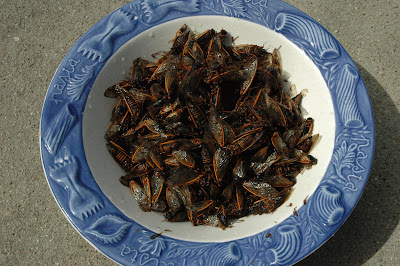 Though the bowl design features "pasta," we should note that insects are basically the protein source of a meal.

Cicadas are found worldwide and are a very popular food. Heck, Aristotle wrote that the last earth-bound stage, before the animal breaks through its thin brown shell, that's the tastiest. He loved them.

Hi
http://www.royalpalmcafeandinn.com/ - generic ativan
You can order Ativan(Lorazepam) at reliable online pharmacy and save money.
[url=http://www.royalpalmcafeandinn.com/]ativan anxiety[/url]
? Ativan can cause severe drowsiness and difficulty in breathing, which may be life-threatening.
buy ativan online
This is further increased when Ativan is combined with alcohol, narcotics, or other medications or substances that cause drowsiness and sedation.