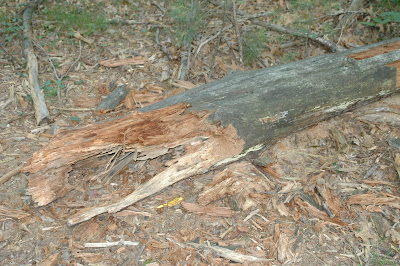 This might not seem a dramatic image. It was the site of a great catastrophe, at least from the perspective of the carpenter ant colony that lived there. I am what befell that colony.


I'd first turned over the log on impulse, and replaced it carefully when I found a seething mass of large, winged black ants. I returned the next day and a few times after that over the next four or five days. The ants were members of the genus Camponotus, a.k.a. carpenter ants. I've known for some time that people have eaten these ants here and there; supposedly lumberjacks in 19th Century Maine ate them to avoid scurvy.

I'd envisioned a "clean kill," meaning a labor-efficient harvest wherein I could harvest the insects only. It didn't work out that way, mostly because the ants had no interest in being harvested and therefore tried to run away very quickly. And it's true that that seething business rattled me; I knew that the ants couldn't hurt me, it was just that as I was scrambling to collect as many as I could, this is what I ended up with: 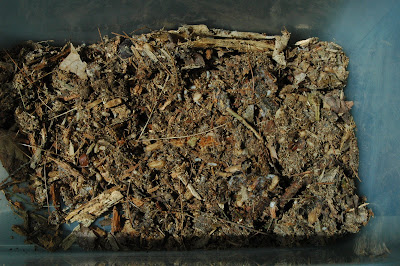 A whole lot of wood bits, dead leaves, and some soil, with a good deal of ant-made sawdust. It required a good deal of processing. I would've liked to document this process, but the sad truth about both this blog and much of my work in entomophagy is that I do a lot of it alone so there's no one to hold the camera.

I had about six or sevent containers from my various raids; some had this litter from the forest floor; in others it was mostly sawdust from inside the log. I found that sifting the mix in large bowls worked quite well, reminiscent of the old-fashioned wheat-from-chaff technique. All of this in order to get to the prize: the pupae. 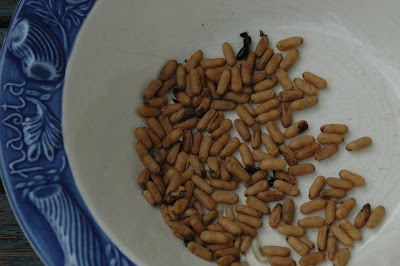 Of course I'd collected a heck of a lot of ants too, and I was most interested in them also, despite my slight concerns about Wolbachia -- an endosymbiont that wouldn't do me much good if it was in my system. Here's the ants with a few bits of wood [toward the end of the sifting]. 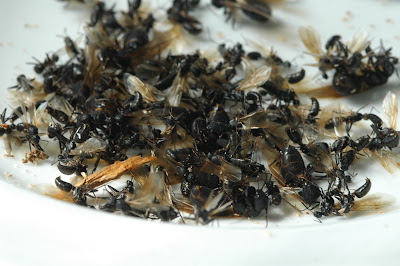 And here they are again -- the queen (one of many; methinks the colony, having done well for itself, was about to send a whole raft of winged alates into the the world); some drones; and the necessary workers. 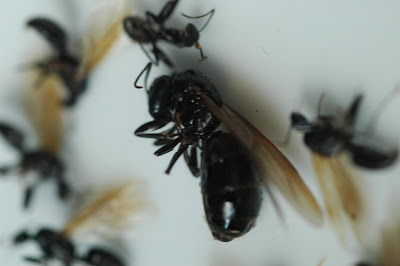 I find the ants quite beautiful, dead or alive. And working on prepping them as food emphasized what I'd felt when I was collecting them at that log -- a touch of guilt. 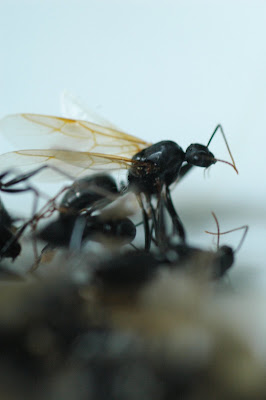 I thought of the colony as a society or a machine consisting of living parts, each of which pursues its function for the greater good of the whole. This conception is on my mind quite a lot, and it's something that I'm pretty sure I wouldn't find in hunting magazines (if I read them, that is). A "real" hunter, as represented in such publications, respects his or her mission and goal; respects the quarry and the landscape too; honors the kill, but doesn't succumb to any feelings of guilt about having to kill. After all, hunting is simply the involvement of the meat-consumer in the process of getting the meat, and therefore the hunter is more authentic than someone who simply lets others do the killing, and merely picks up the wrapped and sanitized Styrofoam tray in the supermarket. There's a lot to be said about that perspective.

I appreciate the times when I feel this way, which I sometimes do. Other times, though, I have other feelings. When I was collecting cicadas off the trees in New Jersey in 2004 I thought a lot about the fact that these insects had been underground for 17 years, all in order to emerge and mate and die. All of that time in preparation for procreation -- arguably, the prime evolutionary function and purpose of every organism. And here I was, getting in the way of that. Granted, it's not much of a stretch to say that I was acting like any other predator. The mass emergence strategy of these multiple billions of cicadas was an evolutionary response to my actions as much as it was to the actions of birds, snakes, skunks, raccoons, bats, etc. The cicadas are a temporary banquet. "Go ahead," the vast numbers seem to say. "Eat all you want. We'll make more anyway. All of your efforts cannot make much of a dent in our overall numbers." How generous. Yet I remember the mixed feelings as I scooped up dozens of handfuls of live adult, newly-winged cicadas and the just-emerging nymphs into the large ziploc bags that went straight into the large icy cooler.

And so it was with these ants. A nation is attacked by something with greater technology. I don't really need to kill the ants, since I have lots of other foods that I could eat. But I'm trying to make a point here with entomophagy. It's just like other kinds of hunting, right? 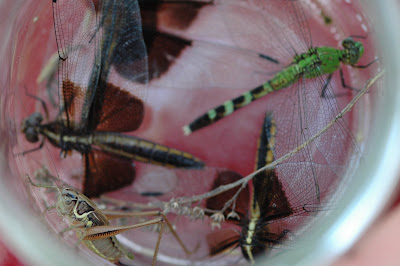 Another kind of hunting these days has been for dragonflies (and the odd grasshopper along the way). It's the opposite of 'anting;' for one thing, it requires stalking and netting the individual insect, and so it would seem to be less labor-efficient. Given the way that I've executed this ant project, though, it's a toss-up.
Posted by Dave at 3:45 AM