ANOTHER new edible insect in the mail! The Big Ants

I've been sitting on this pretty amazing news for a little while now, getting ready to blog it, as the kids say. First I’d gotten the chapulines (picked up another 4.5 pounds from the Mexican market just today), then the cicadas, and then these big ants. By the Fall I hope to receive two or three other kinds of insects.

I’d contacted a member of http://www.bugguide.net/, a pretty cool group that posts images of North American insects and other arthropods; identifies the species, collates geographical information, etc, etc. My contact lives in Texas and had posted images of leaf-cutter ants – specifically the alates, meaning the winged reproductives that some types of colony-living insects send out at specific times. In this case that would be, more or less, in the second half of May.

These ants [in the genus Atta] are cherished delicacies in Colombia and other places between there and the U.S. Were it not for concerns about slowing down these posts with lots of extra text I’d cite some intriguing stuff about the Spaniards, when they arrived in what became Colombia, scorning the local caviar, as it was thought of, only to attempt seizing control of the ant colonies once they got a taste for the insects. This decision provoked an uprising from the natives. Those interested in reading this for themselves can find it here.

Though at first that Texas connection wrote that -- had missed the brief emergence-time of those winged queen ants, word later came that -- had been successful after all! Very exciting news.

At length the large box arrived [note my foot for scale, and that I've cleverly obscured the sender's address on the shipping document] 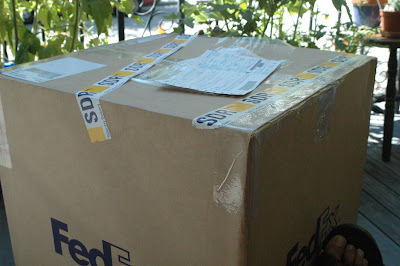 inside was a Styrofoam cooler, 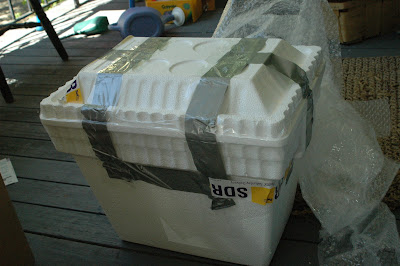 and inside that was OVER TWO POUNDS of ants. 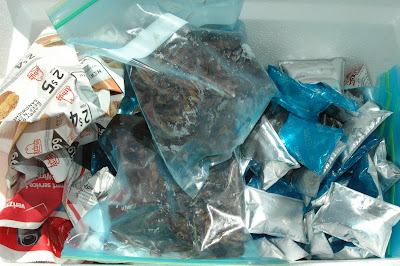 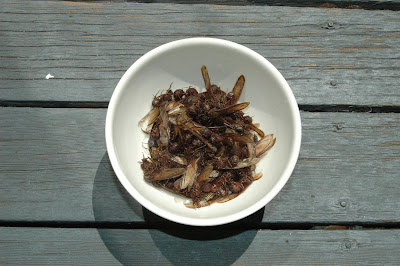 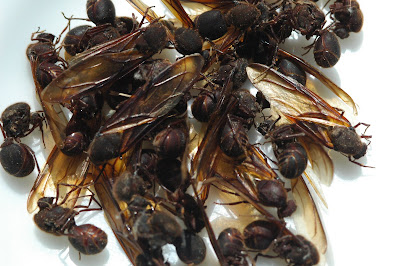 The real question, though: how do they taste? The morning after I got them I laid a few down on a hot iron skillet. I tried both winged and wing-free individuals; unlike those of the cicadas, these wings really did get in the way. The flavor is very nice; surprisingly mild.

I’ve tried these ants before – pre-packaged [and quite expensive.] The flavor is very intense, almost harsh. I’ve heard that fresh off the vendor’s cart in Colombia they’re heavenly (and, again, quite expensive). The ants are still enjoyed today, and are called “hormigas culonas,” or ‘big-bottom ants’ due to their impressive abdomens.

Given that I've greatly enjoyed these ants in other settings, I'm pretty certain that I can make them taste even better.

This item is just the kind of thing that those few discerning customers ask for; the ones who want more from life than the standard crickets and mealworms. When this happens I'm ready. 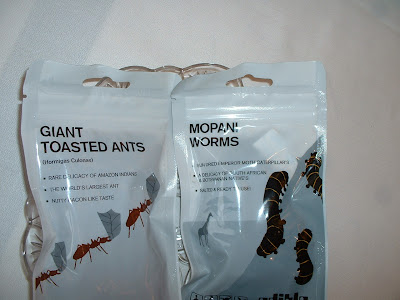 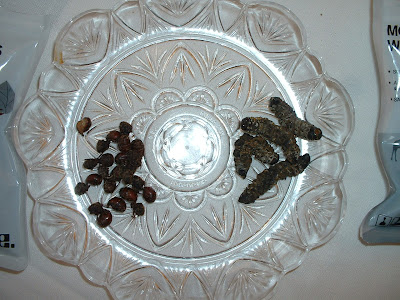 Also worth mentioning: I've seen one or two websites centered on the harvest and preparation of these ants in Colombia. Not altogether surprisingly, these sites are in Spanish, which I cannot translate. So getting some help with that would be great...

On the other side of the plate are the mopani worms; they shall have their own substantial post at some point.... Boy, would I love to get a source of those!!

As for the Texan ants: my source mentioned having some ideas for, hopefully, an even bigger harvest next Spring.

boy i wish i had the opportunity to try the ants and worms yesterday at Geoff's. but the cicadas were my favorite from yesterday's options.
God is good
jpu
http://umbl0g.blogspot.com

I only tasted one of these ants, and that was many years ago while I was in Colombia. I would love to get a sample of them for my wife and some friends (and for myself, too, of course).

Perhaps I can help with the translation. While I lived in Colombia I was able to communicate in Spanish. I'm brushing up on my Spanish now and hope to return to Colombia in a few months.

I only recently read your comment. I could perhaps satisfy your curiosity with a taste of these ants; we could talk about how that might work. On the other hand, if you might have a chance to get some of this food from Colombia, I'd really love to get some of those for myself. Sending me an email would be the best method for starting a chat if you'd like.
Dave

It was rather interesting for me to read the article. Thanx for it. I like such topics and anything that is connected to them. BTW, why don't you change design :).

Thank u :) look at that emo boy one over this blog:
http://emo--boys.blogspot.com

Digital memory is something that I seem to be unable to ever have enough of. It's as if megabytes and gigabytes have become an inseparable part of my day to day existence. Ever since I bought a Micro SD Card for my NDS flash card, I've been on permanent watch like a prison guard for large memory at low prices. I feel like I'm going insane.

Nice brief and this post helped me alot in my college assignement. Say thank you you on your information.

Just want to say what a great blog you got here!
I've been around for quite a lot of time, but finally decided to show my appreciation of your work!

Thumbs up, and keep it going!

Good fill someone in on and this enter helped me alot in my college assignement. Say thank you you seeking your information.

Restaurants in the United States. Search or browse list of restaurants. http://restaurants-us.com/la/Dixie/Johnny%27s%20Pizza%20House/71107/

Thank you. Wonderful article. Ended up being searching for a while. Hoping for many more personal blogs by you down the road.

Thanks for this particular beneficial publish! Make sure you keep it coming back. Many thanks.