Colbert and then Thailand: Part One

I've been back a little over a week and it's time to start describing my adventures.


Being on The Colbert Report was great, though the interview wasn't quite everything I'd hoped for. A bunch of people had commented that it's too bad he didn't try an insect and I guess that's true. I was nervous and didn't quite live up to my own standards but I had fun, didn't embarrass myself too much, and even made him laugh so that's something. I didn't get my picture taken with him or anything like that, so there's nothing to show you really. At the time I didn't have that starstruck 'must get photo opp with celebrity' thing.

I stayed overnight in Manhattan and managed to do some extra filming with an independent TV maker the next morning. Took the Acela train back and had a few hours in the evening with my family. Finished packing. Left for Logan Airport around 1am [thanks again John!]. Then to a layover in Chicago, where I was smart enough to buy Nyquil. 13 hour flight to Tokyo, then to Bangkok and then Chaing Mai at last. My first time in Asia.

Chiang Mai is a medium-sized city full of bad air, tourists, temples, and street shopping. It never took very long for me to get a little sick of walking the streets yet the city has its charms. Due to my limited world-travel background it was like a different world, though as you can see some things are universal: 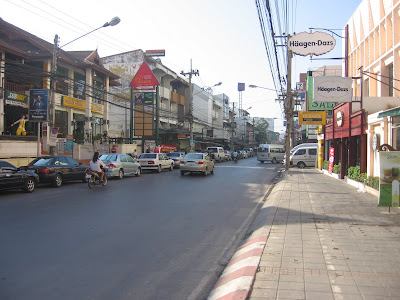 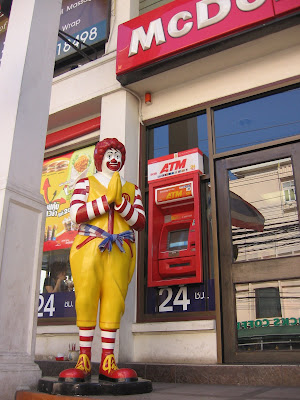 The streets were very quiet in the mornings and full at night, even though the days weren't so hot when I was there. Lots of foreign shops, probably for the farangs [tourists]. Lots of everything except urban greenspace.

And then those temples: 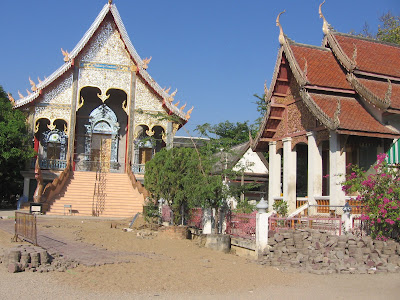 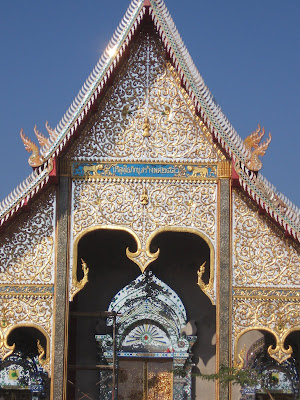 But the heck with the scenery: you might want to know whether I ate insects there. Do you think I'm the kind of guy who would eat insects there? THAT will have to wait for the next installment.
Posted by Dave at 8:14 AM