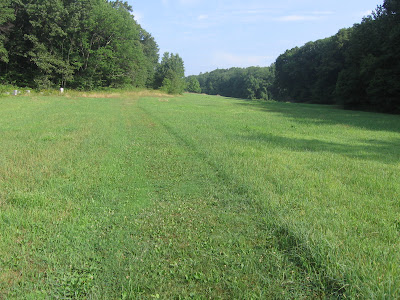 It's cold now, the insects are gone. I can only anticipate more hunts next year and recall this setting of past strivings; the epic struggles between a determined human hunter and a host of highly-evolved flying insects.

Man Eating Bugs, the impressive ‘picture-book’ by Menzel and D’Alusio that illustrates worldwide entomophagy, includes dragonfly hunting on the exotic island of Bali. The people there call them ‘sky prawns,’ which is significant. I knew I’d have to go get some, and that the hunt would be hard work. I once read about a simple way to catch dragonflies – pluck them while they rest on branch-tips over little streams at night. But I’ve never found them that way. It would be either stalk/charge/swing-the-net or nothing.

This made the hunt the most labor-intensive I’ve executed. Some would say more laborious than the prey is worth but if I started listening to the voice of reason I might be tempted to give up on entomophagy altogether, and hat would be a crying shame.

The Indonesian method was similar, but craftier. The hunter [generally kids] would visit the ponds and paddies frequented by dragonflies. The tool of choice: a considerable length of reed, the end of which coated in sticky tree sap. This would be held out like a perch and yet flicked at the right moment, taking an insect while on the wing.

My technique: Iaido-style. The haft is held down and to my left, across the body, double-handed. Having sighted my target, I approach stiffly, one footfall at a time. I would keep my eyes locked (not always as easy, especially when another target would interpose) until the moment to swing the net. Once I learned to swing just above the insect's resting position I could sometimes see it rise into the net's apeture, but at least as often I saw it sail away over or beyond the net. My average was not very impressive but I improved.

The documentation: minimal, merely these words and images. I've been obliged to work alone so there’s no one to hold a camera. I took these pictures so I'm not in them. I probably looked so ridiculous out there that only motion picture [a la Youtube] would have done it justice.

The results: not too bad. 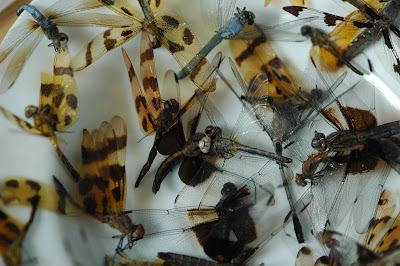 I haven't done much to identify them; this bothers me a little, since, given how little is known about which insect species are edible and which aren't, it would be useful to have a lock on what I plan to eat or to serve to the public. But I've spoken with an expert or two, and there seems to be no records of any toxic in dragonflies North America. So that's reassuring. 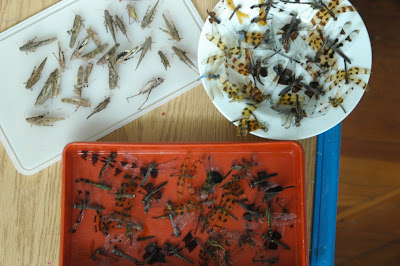 I did get some large grasshoppers along the way. They're much easier to identify, by and large, when it comes to that: they're Dissosteira carolina and they're not easy to catch. In fact before I developed my own technique I looked really silly chasing them across the field as I missed getting them again and again. Once I got my method on, though, things were slightly different: I caught them once in every 5 tries instead of once in every 12, and though I still looked ridiculous it wasn't quite as bad. 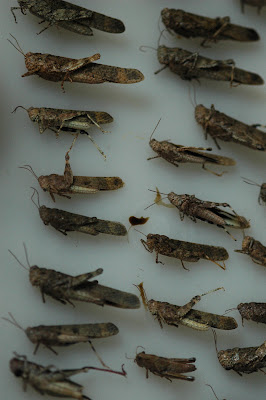 There were other good moments out in the field; birds, deer. Once I surprised a young black racer and managed both to get him in the net and then out again in my hands before he could foul the material with his very nasty-smelling cloacal emissions. After admiring him I let him go. After all, this is not a reptile-eating endeavor I’m running here, and I have no interest in taking an animal from the wild as a pet.

The eating: dragonflies taste a bit like burned toast, but the texture is unique. 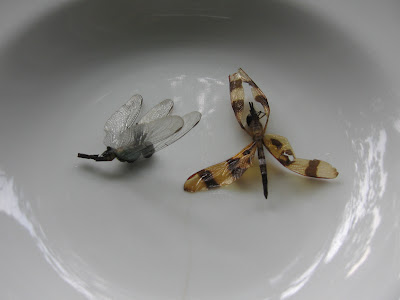 It's no surprise that cooking the dragonflies robs them of some of their delicate perfection. They look pretty good on the plate, but nothing compared to freshly-frozen.

What will I do with these insects now that I've got them? They're available for the contest in Richmond, or for some special order from a customer. And I'll probably experiment with a preparation or two as well.
Posted by Dave at 12:20 PM