Food for Thought: An impressive success

This was a big event for SLS. I was in the company of some of the best-known restaurants in Providence – a town where people like their restaurants. The setting (the newly-expanded Botanical Gardens at Roger Williams Park) was lovely, and the guests seemingly better-heeled than myself. I still hope to get some pictures of the actual event; but first, a couple images of the preparations.


The most labor-intensive prep was ‘filleting’ the Giant Water Bugs. We [I got a lot of help from the staff and students at the Genesis Center) did 175 of them. I thought a good deal about what the professional crab-pickers did with those world-famous Chesapeake Bay Blue Crabs. 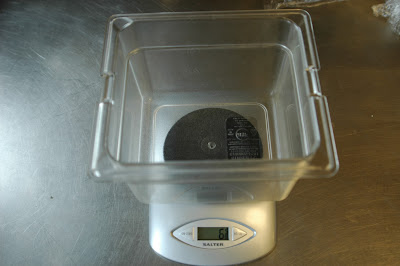 This is the empty square. The Six-and-five-eighths ounces of empty weight is equivalent to 188g. 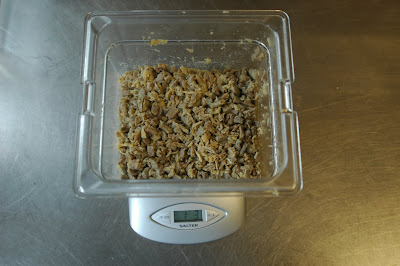 Later, filled with the meat of the 175 insects, the one-pound-and-three ounces equaled 540g. Close perusal will reveal two kinds of tissue; the darker and more-square pieces are from the thorax of the animals, and might just correspond to pectoral muscle(?). The lighter-colored stuff is more connective rather than central. If that makes any sense. Seeing the inside of the insect would be helpful; I'll try to get some good macro shots of that this winter. 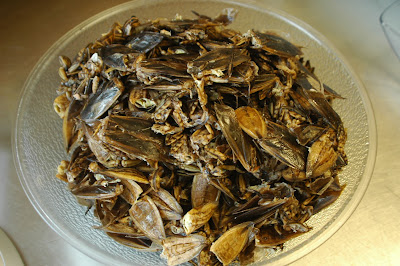 Here are the shells. The weight was 2 pounds and 11 oz. I don’t have the metric equivalent but it doesn’t really matter since this mound does not represent all 175 of the insects; some were discarded and could not be retrieved. I tried to boil the shells so as to get a stock but they proved far too salty to work with.

And Here Is The Finished Product!: 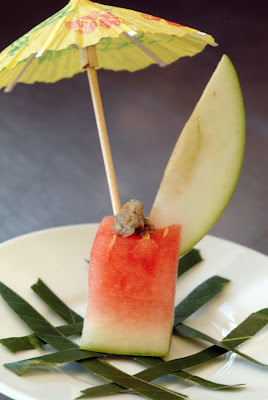 The first name we gave it -- we being myself and Chef Branden Lewis of the Genesis Center, who was wonderful to collaborate with -- was Sour Candy Canape. This name reflected the fact that the bug's meat is reminiscent of sour candy, especially for example Jolly Rancher. But this first name morphed into WaterBugaMelon, since Branden wanted to be more clear about the fact that the dish contained insect protein material.

Traditionally, some people salt their watermelon in the summer. The saltiness-yet-fruitiness of the meat paired well with the fruits. The cocktail umbrella is for decoration only.

Then there were the crickets, which were good also although the planned dish didn't quite get off the ground. The intention was to 'honey-roast' them and serve with popcorn. We were to call it "Popcrick," and maybe next October we'll get it nailed down. Here they are on the roasting pan 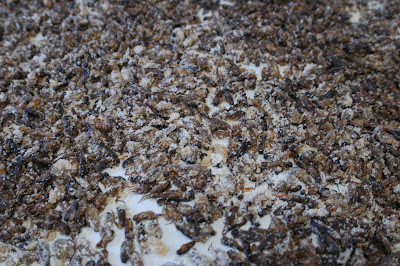 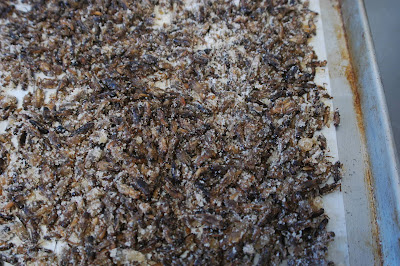 and yeah, they were tasty; the sugar didn't overwhelm the nuttiness of the crickets themselves. But we had some problems with the popcorn maker, and in the end I'll need a real honey roaster, which I've seen at carnivals and suchlife venues but I haven't found something affordable that could fit the need.

I was too busy that evening to take pictures of the diners, but I may be able to track down some images one of these days. My tables were quite busy, though, and the even raised my company profile here in Providence, as well as started me off with a really nice collaboration with The Genesis Center, which is a great place.

I'll be serving the bugs at the next Food For Thought in October 2008.