A couple days ago I drove about an hour and bought nine bags of African grasshoppers.
I’d learned in October that a Ugandan community gets a shipment of grasshoppers in December. I knew that I'd want some of them, but I didn’t want to drive all that way for nothing. Since I’d lost the business card from my first visit, it was time for some internet research to find the right number to confirm that the product was available. As usual the calls were circuitous, amusing, and ultimately successful.

I was told the price-per-bag but not the size or weight of a bag; this made the information meaningless. I wondered what the unit price, per-pound or kilo, would be. I figured that since the immigrant community was probably not very wealthy, the item would not be very expensive. Yet the product arrived only once or twice a year, and I was pretty sure that it had a lot of sentimental value as a taste of the homeland.

I arrived in the city and achieved my goal within 15 minutes. The bags were disappointingly small. I spent roughly the sum I'd planned to, but the amount of product was miniscule. I’m not sharing how much I spent, since it’s already easy for people to decide that I’m crazy. Some would say I’m making a big deal out of a modest amount of money, while others would be amazed at how much I spent. The little bags make a pleasant pile on the kitchen table. 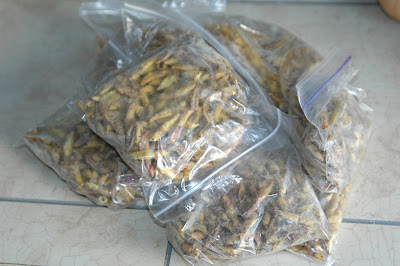 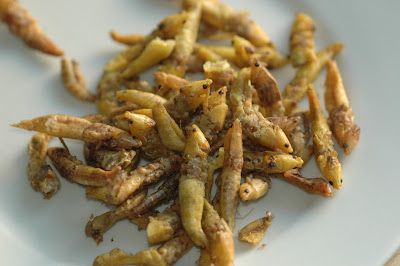 The important part is to find out what insects taste like, and in the bigger picture to understand how people can feed themselves within harmony with nature. I’m getting a taste of a market in Kampala. I’m increasing my stock-in-trade.

They’re called Nsenene, which I suspect is onomatopoeic in origin. Since pronunciation counts: say “NnnnnnSEH-neh-nay.” The word is spoken quickly, as though the syllables are running out of your mouth. 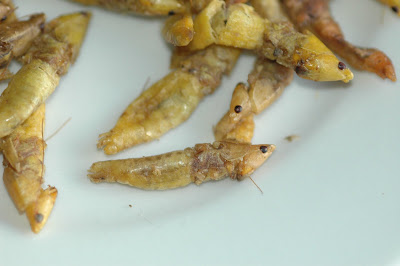 Googling the name, I found several helpful sites, mostly blogs of those who’d had Ugandan experiences. All described how the insects are caught and processed: legs and wings are removed. Few of the sites included a binomial, and most that did listed Ruspolia nitidula. I was/am curious to know if there's something similar here in the U.S.. When I checked Bugguide I found the genus Neoconocephalus, which features several very similar looking species. I figured out two useful things: first, nsenene are katydids, not grasshoppers. This is good to know. Second, it's the mass movements of nsenene that makes for relatively easy harvesting during the season; this is not the case for the American version of this kind of katydid. But there's always the Mormon cricket, a species of large, flightless katydid in the American West. They were routinely mass-harvested by American Indians. But since nsenene are so tasty, I'm wondering if they -- or something just like them -- could be farmed...
When I cooked a few [or simply warmed them, actually, on aluminum foil in the toaster-oven] they turned a reddish golden-brown. 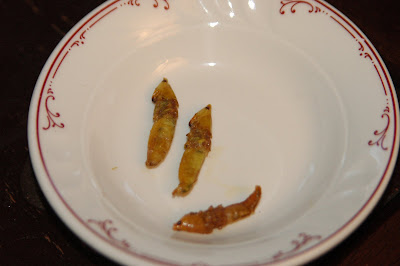 Two friends had come by and were up for a tasting, though they were a bit hesitant: 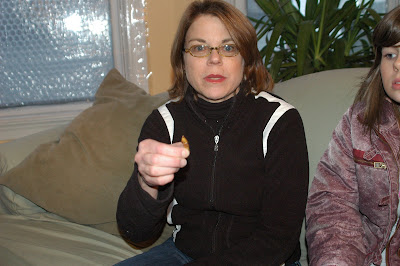 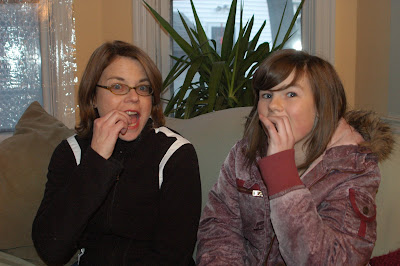 Of course I had one myself, though I didn't get around to shooting that. All of us proclaimed them very tasty indeed. They’re surprisingly buttery on their own, and taste like a cross between chicken, shrimp, and croutons.

And there’s some other intriguing developments [which as you loyal and patient readers will know by now is nothing new.]
I’m speaking with the great and noble Steven of Louisiana about the potential for starting an insect-rearing facility in his area.
I’ve contacted a researcher in stinkbug propagation, and it might be possible for me to get a supply of these insects.
I’m hard at work on the reprinting of the Food Insects Newsletter. Right now I’m constructing the various indices, which is less fun than when I'd started.
Posted by Dave at 11:07 PM

nsenene is one tasty kind of insect. thanks for sharing. am from Uganda

nsenene is one tasty kind of insect. thanks for sharing. am from Uganda

Did you manage to start the nsenene business?

I am not sure where you're getting your info, but great topic. I needs to spend some time learning more or understanding more. Thanks for magnificent information I was looking for this info for my mission.


I found your blog just a few days ago so I have a lot of reading to do.
MDX Concepts Gypsum Spray for Bed Bugs