Bread and Vodka (and new friends)

Among the several new projects at SLS are two that have me working with new colleagues!

The first is insect flour. I'd worked with it a few years ago and wanted to do more with it. This speaks to the question of, "is it okay to transform the insect as part of processing it into food, or is that 'selling out?'" For a while I was against 'hiding' the bugs, but I've come to realize that if people are aware and content to benefit nutritionally, environmentally, etc from the experience of eating insects, that's what matters. Besides, it's good to meet people half-way. If eating a slice of toast (ground-up insect and all) is easier than chomping on an entire insect body, then why not help the people out in that regard?

The process is simple: take your thawed crickets out and dry/toast them in the oven. Then grind into flour. 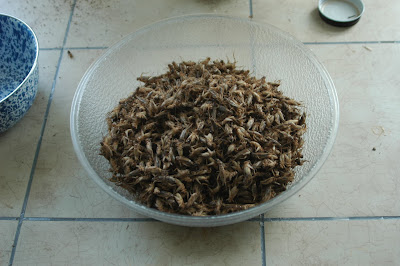 A couple weeks ago I dropped off the flour at Liberty Elm Diner at 777 Elmwood Avenue in the glorious city of Providence. Liberty Elm is a relatively new establishment and they're multo cool -- not just because they're willing to bake with insect flour. Their food is great, they've got live music, and they're friendly and wiki-enabled. You can learn more about them at

Here's the flour and what we made with it. 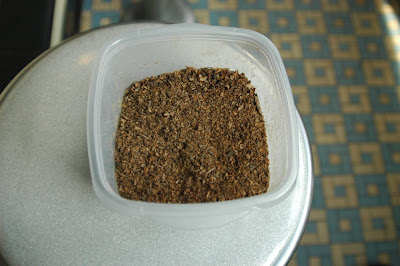 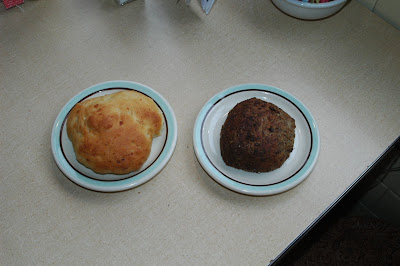 In fact the diner's baker made the wheat-flour/potato bread both with and without the cricket flour, for comparison's sake. The dark one contains the cricket flour; it was also quite a bit denser. I'm mildly embarrassed to say that I don't yet know exactly how she worked that recipe -- how much flour was called for, and how much cricket flour was used, and did the latter simply replace the usual flour or was added to? Questions like these need answering, but the more important details are that the cricket rolls were very tasty, with a sort of parmesan cheese taste to them; AND that even though the rolls were not officially on the menu, several people ordered and paid for them! Most cool. With a little more effort I could help Providence reach the forefront of entomophagic cities in this country...

The other project: BOOZE!

I am fortunate enough to be in contact with the illustrious Baron Ambrosia, who creates some pretty amazing stuff in NYC. He's classy, enthusiastic, and he excells at staying presposterous. You can get a taste -- nay, a banquet! -- at http://www.underbellynyc.com/season1/

I have no images yet, just this link to the episodes of Underbelly. As can be seen upon a perusal thereof, each of the episodes concludes with the proclamation, "Stay Preposterous!!" From what I can tell he's all about the high life, and to that end he's got some very interesting ideas about capturing the essence of insects [particularly the giant water bugs, for example] in distilled spirits such as vodka. This is just the kind of thing I want to work with, since it's another way of making the concept of entomophagy a viable option. But in terms of the Baron himself, there is a good deal more going on.

Granted, at first blush it looks like he's only playing around, there's a serious message too. The Baron has filmed not only in the gritty 'first-world' of The Bronx, but in Liberia and Sierra Leone as well. He and his crew plan to visit Somalia and Chechnya in the coming year. When I asked him about his predilection for travelling to places wherein he's likely to have his ass shot off, he said something like, "The Baron loves the world. I want to do things the other shows won't do, which is to show how beautiful people really are." Granted this was a telephone conversation, so I can't claim to quote verbatim, but the gist is that in the service of humanity there is no danger to fear. I was moved. And I look forward to working with him.