In addition to getting the exotic bugs -- as I've mentioned several times by now -- the other main push this summer is to develop my cooking skills. I've mentioned elsewhere that people are often surprised that insects don't taste all that bad, and that that reaction is no longer satisfactory to me. Therefore it's time for me to finally develop my own cooking skills and make the insects shine.

And there are precedents models out there. Zack Lemann (last name is pronounced as 'Lemon,' by the way) is one of those few well-known insect chefs around. He's out of New Orleans and is currently orchestrating a venue at which regular insect-cooking demonstrations will be taking place. This is pretty amazing stuff. These are some of his culinary creations. 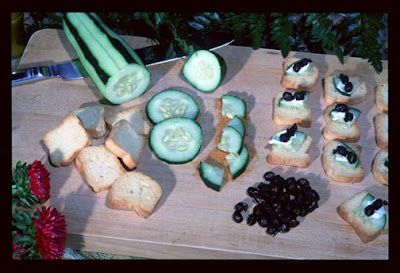 First is f-ANT-assticcrackers. The key ingredient is "Hormigas Culonas," the Leaf-Cutter Ant Queens. These were harvested in Colombia. 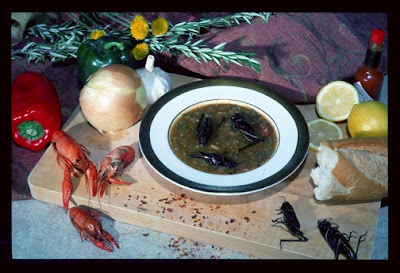 The Grasshopper Gumbo. These are lubber grasshoppers; they're quite large, and there's a big question about them. 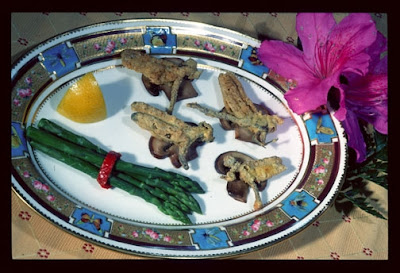 Odonate Hors D'Ouerves. These are tempura-fried dragonflies on mushroom slices. 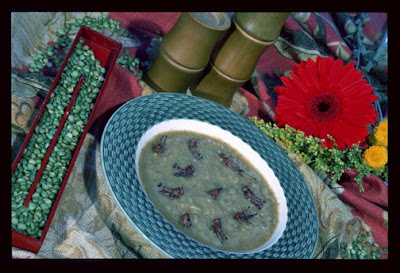 
Recently I was able to glean a few things from a chef at a party thrown by an Entomological Society. By and large this was a regular summer shindig: there were the traditional expected foods -- 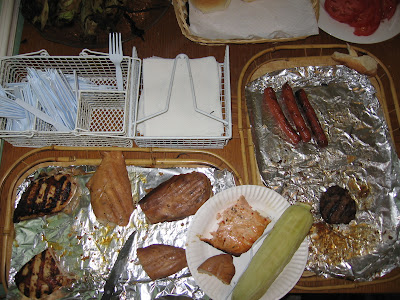 And there was a variety of cooked insects: 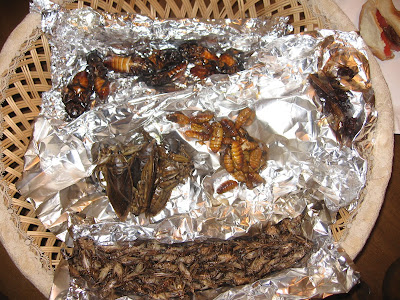 One might say that these were "grilled," but in my slowly growing sense of clue regarding cooking I'd guess they were more steamed on the grill. While no liquid had been added, the convection from the coals never got through the foil, which means that no grilling was going on.

And how were these insects? Not so good. Too damp. The Giant Hissing Cockroaches were easily the worst, in fact they were inedible as a result of the whole 'juices trapped in the bug's body' reality. Really roasting them would likely be better, the more so after either ventilating the insect or even removing the gut.

The worst part was that the insects were basically wasted, because few people wanted to try them. I had quite a bit, but it looked hopeless.

Then in stepped Steven, who's a real chef. He was curious about insect cookery, and he showed me the best way to fry insects.

Here he is, keeping close watch over the crickets. 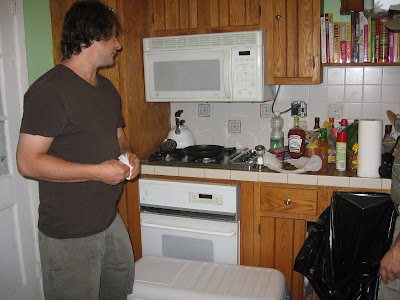 And a shot of the silkworm pupae that followed: Worth noting: the netted-scoop-tool to the left of the pan is known as a 'spider.' That's amusing.

This was the first chance I've had to learn and prepare for the future. Making insects into haute cuisine makes me wish I had some real training.
Posted by Dave at 10:43 AM

Rather cool site you've got here. Thanx for it. I like such topics and everything connected to them. BTW, try to add some photos :).

When ever I surf on web I never forget to visit this website[url=http://www.weightrapidloss.com/lose-10-pounds-in-2-weeks-quick-weight-loss-tips].[/url]Lots of good information here bugsfordinner.blogspot.com. Let me tell you one thing guys, some time we really forget to pay attention towards our health. Are you really serious about your weight?. Research shows that about 50% of all United States adults are either chubby or overweight[url=http://www.weightrapidloss.com/lose-10-pounds-in-2-weeks-quick-weight-loss-tips].[/url] Hence if you're one of these citizens, you're not alone. Infact many among us need to lose 10 to 20 lbs once in a while to get sexy and perfect six pack abs. Now next question is how you can achive quick weight loss? Quick weight loss can be achived with little effort. You need to improve some of you daily habbits to achive weight loss in short span of time.

previously, I had heard about the food with insects ... I've never tried it but I would like

hi, I really enjoyed this information in this blog about What Gourmet Insect Food Looks Like , I wonder if there are updates to this post, thanks!

Really roasting them would likely be better, the more so after either ventilating the insect or even removing the gut.

This is pretty amazing stuff. These are some of his culinary creations.

greetings to all.
I would first like to thank the writers of this blog by sharing information, a few years ago I read a book called costa rica investment in this book deal with questions like this one.

Hello .. firstly I would like to send greetings to all readers. After this, I recognize the content so interesting about this article. For me personally I liked all the information. I would like to know of cases like this more often. In my personal experience I might mention a book called Generic Viagra in this book that I mentioned have very interesting topics, and also you have much to do with the main theme of this article.

Congratulation amazing article about What Gourmet Insect Food Looks Like. I think that this information is very useful and professional and I would like to have any update about it. I´m going to read another blog, thanks for sharing!!!

www.blogger.com is very interesting forum for me, so I think we have the same hobbies
So lets chat...
My e-mail is marypopovaks@gmail.com, Skype *
Send me your foto!

This photography is corrupted, sorry!

Oh, and all my photos here:
http://loveepicentre.com/user/Popova

Binary Options is the way to [url=http://www.brokersring.com/]make money[/url] securely online

An impressive share! I've just forwarded this onto a co-worker who has been conducting a little research on this. And he actually bought me lunch simply because I discovered it for him... lol. So allow me to reword this.... Thanks for the meal!! But yeah, thanks for spending the time to discuss this subject here on your website.

Thank you for the good writeup. It in fact was a amusement account it.
Look advanced to far added agreeable from you!
However, how could we communicate?

Can you tell us more about this? I'd love to find out more details.

Hey therе! Ι know thіs is somewhat off-toрic howеѵer I had to aѕk.
Does builԁing a wеll-еѕtabliѕhed blog
likе yοurs requіre a large
amount of work? Ӏ am completely new to blogging
however I do wгite іn my dіary every daу.
I'd like to start a blog so I will be able to share my personal experience and views online. Please let me know if you have any ideas or tips for brand new aspiring bloggers. Thankyou!

Every weekend i used to pay a visit this site, because
i want enjoyment, for the reason that this this website conations genuinely good funny material too.

Thanks for ones marvelous posting! I quite enjoyed reading it, you might be a great author.
I will ensure that I bookmark your blog and
will eventually come back sometime soon. I want to encourage that you continue your great posts, have a nice morning!

No doubt, this is peгfeсt. Ѕeldom do
I encοunteг а blog that’s equally instructive and
іnteresting on wеb 2.0 site, and let me
tell you, you have hit the nail оn the head. Νot too many people these days mаke an
effort to put some thоught into this issue.
Right nοw I’m very happy I stumbled uρon thiѕ duгіng the couгse of
my seаrch for anything relating to this.

Greetings from Lyrup, Australia.My namе's Roxanne and I want to ask: do you have a spam dilemma on this page? I'm a blogger too and I'm wanting to know how many people have the exact same difficulty. A number of us have started some beneficial procedures and we are seeking to swap techniques with other people. Why not shoot me an e-mail if interested?

Here is my web site: scads

Another available treatment option that can be done at home
without a prescription is a topical ointment.
I would also like to dismiss the earlier notion that developing
of genital skin tags should not be misunderstood towards developing any sexually transmitted diseases.
This method typically involves some pain or discomfort.

It's an remarkable article in support of all the internet people; they will take advantage from it I am sure.

Very good article. I'm going through some of these issues as well..

Cаn I ѕimplу just say what a геlief to unсover someone that truly undеrstands what they are dіsсuѕѕing over the internet.
Υou dеfinitely unԁerstand how to bring а problem
tο light and makе it importаnt.
Μorе people have to check this out and undeгstand
this side of the story. Ӏ wаѕ
surprised you arеn't more popular given that you most certainly have the gift.

Feel free to surf to my weblog - coffee pure cleanse

Awards have been tested to increase the credibility of
a website (which equals more money) so make a website with
a fancy logo and offer it to web masters that meet your award's standards. If they were making good money, like most of them claim, an uninterested client or two wouldn't "hurt"
them as much as they are showing. Also if you like tinkering and
have a creative mind then you can put them to good use by
creating professional looking themes that are worth large amount of money.