A good many of these posts will be old history of what I've been doing in the last three years or so [though the real goal will be to serve up "hot off the press" posts], but here's some relatively new news. On May 17th I served I gave an insect tasting at an Audubon party, celebrating the hard-working people who nurtured the Broad Meadow Brook Conservation Center and Wildlife Sanctuary over its 15 year history in Worcester MA. Some of the attendees were really into what I was serving, which is always good. Some of them were really into the Giant Water Bugs that I so love to serve, and others chowed down on the less ostentatious cricket. Though I did hit my usual environmental message a little, I was content to be part of the entertainment, along with the talented caricaturist who did a great job on me. 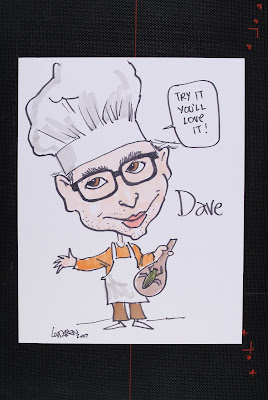 In fact, yeah, that's one of those Giant Water Bugs right there; I'm holding it in the wooden spoon. And a big “Thanks” to my good friend Trip Wolfskehl of Screen Craft Tile Works in Providence for scanning this for me.

And while I'm at it: the Newark gig was two days ago, and that went very well. Bug Mania! 2 had well over 1,000 visitors; not all of them came over to my table, and even fewer ate insects, but quite a few folks got involved.
As it happens, this was one of the gigs where I was on my own, so there was no-one there to take pictures. I may be able to score some from the museum's photographer [you never know...]
Posted by Dave at 9:48 AM